Why China Wants To Dump the Dollar

China’s Dagong credit rating agency on October 17th downgraded its United States sovereign credit rating to A- and maintained its negative outlook on America’s solvency.  Dagong warned that despite Washington’s last-minute resolution of the debt ceiling deadlock: “The fundamental situation that the debt growth rate significantly outpaces that of fiscal income and gross domestic product remains unchanged.”  China’s official state-run news agency, Xinhua, reiterated its statements  that because of the continuing risk of a U.S. debt default, it is “a good time for the befuddled world to start considering building a de-Americanized world.”  This language is code for Chinese want to abandon the U.S. dollar as the world’s “reserve currency” move international financial transactions to the renminbi, the currency of the People’s Republic of China.  Having benefited for twenty years from their under-valued currency importing manufacturing jobs and exporting lower priced products, China’s comparative advantage is being destroyed by America’s oil and natural gas fracking boom.  The Chinese communist authorities are terrified their loss of competitiveness will cause unemployment and the social consequences that flow from it.  But with the terms of trade now substantially against China, convincing the world to dump the U.S. dollar as reserve currency and switch to the Chinese “renminbi” is their best hope to try to save tens of millions of manufacturing jobs. END_OF_DOCUMENT_TOKEN_TO_BE_REPLACED 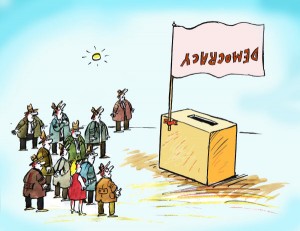 Americans are told we must fight for democracy around the world. Leading up to elections, politicians extol the democratically-expressed wisdom of the electorate (that those elected often overturn).  We are told that the American Revolution was for democracy; that people died (and are still dying) for our democratic right to vote; that each vote was crucial; that if you don’t vote, you don’t care about America; etc.  We even hear proposals to replace the Electoral College because it isn’t democratic enough. END_OF_DOCUMENT_TOKEN_TO_BE_REPLACED

The United States is on track to achieve independence from imported Middle East oil within the next seven years due to the boom in domestic and North American energy development.  Consequently, the United States would have eventually ratcheted down our huge military presence in the Middle East defending oil imports.  But just like television scenes of the attack on the United States embassy during the 1968 TET Offensive destroyed public support for the Viet Nam War, last week’s television images of protests against American embassies has devastated public support for a continuing military presence in the Middle East.  The American public will soon demand a crash program to exploit domestic energy resources to facilitate a Middle East withdrawal. END_OF_DOCUMENT_TOKEN_TO_BE_REPLACED