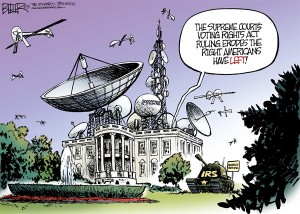 First the IRS. Then the DOJ. And now the NSA. Comparisons of the current Administration to the Big Brother Administrative State must now be taken seriously, particularly in light of recent revelations. The stories revolving around separate departments of our increasingly complex bureaucracy reveal something much broader about the current state of big government and the individual liberties of the average American citizen. The picture painted is one we as a society need to debate very seriously, for the interaction between the administrative state and its people may well be at a critical turning point in American history. END_OF_DOCUMENT_TOKEN_TO_BE_REPLACED