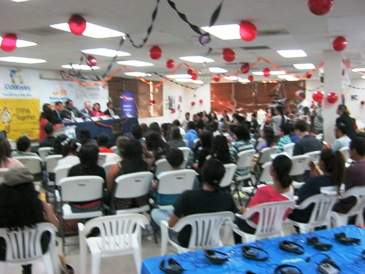 Weintraub makes some great points – including the fact that the GOP’s continued lame strategy of trying to appeal to Latino voters with a socially conservative message is a complete failure.  Here’s what the Republicans missed while they were spending the last few years hating immigrants and accusing them of being here to use welfare – their kids are assimilating, quickly.  And the bad news for the GOP is that the younger Latino voters are not remotely conservative, in any way. END_OF_DOCUMENT_TOKEN_TO_BE_REPLACED

Fourteen candidates ran for two seats on the Anaheim City Council in 2010.  This time nine candidates have qualified for the ballot, including several that ran unsuccessfully in 2010 – John Leos, Linda Linder, Brian Chuchua and Rodolfo “Rudy” Ganoa.  Chuchua was one of two Republican candidates endorsed by the OC GOP in 2010.  They also endorsed Kris Murray, who won – and they backed Tom Tait, who won the Mayor’s race.

My favorite candidate this year is Duane Roberts, a community activist who has an expertise in civil rights, and has a degree in criminal justice.  While he is not likely to win, I know he will do great in the candidates’ debates.  Roberts will bring up the issues the other candidates are unwilling to talk about. END_OF_DOCUMENT_TOKEN_TO_BE_REPLACED

It is time for another look at last week’s election in central Orange County. The most competitive races will now hunker down and start to covet whatever serious money is left. The “Top Two” format will cost additional thousands in races like AD72 where a Republican (hopefully not a Democrat turned Republican like Troy Edgar) previously would have easily won by spending nothing (Edgar didn’t count on that).

The race that no Blog or the O.C. Register has commented on was the most uncompetitive — Janet Nguyen beat the whacko Steve Rocco by almost 49 points (74.4% <> 25.6%). But wait a minute — ONLY 49 points? A four-year County Supervisor with a Vietnamese surname against a ketchup thief? Shouldn’t the gap have been 90 points? 95? Or even more? Isn’t there a message in this? And from who? The District Hispanics? Or, more likely, those who are tired of the vacuous Nguyen, her lack of a record, her inability to put together a complete sentence, or perhaps her political ineptness in messing with CalOptima? END_OF_DOCUMENT_TOKEN_TO_BE_REPLACED

Two candidates have filed with the Irvine City Clerk for the 2012 Irvine City Council election.  They could not be more different from each other. One of them, Evan Chemers, is a Republican and a business owner.  The other, Gavin Huntley-Fenner, claims to be an independent – but closer scrutiny makes that sound like a load of B.S.

Huntley-Fenner serves on the Irvine Unified School District’s Board of Education.  He ran in 2006, garnering 30.9% of the vote – good enough to win.  He won again in 2010, with 37.8% of the vote.  He was endorsed in both elections by the Irvine teachers’ union.  He was also endorsed in 2010 by the Orange County Young Democrats.

Republican consultant Adam Probolosky interviewed Huntley-Fenner in 2010, and check out what he admitted to: END_OF_DOCUMENT_TOKEN_TO_BE_REPLACED