Orange County Supervisor Janet Nguyen knows that if she is to win her campaign for the 34th State Senate District, a purple district, then she will have to somehow convince non-Republican voters to vote for her.  Perhaps that is what she had in mind today when she showed up at the 2013 Fiestas Patrias Parade, in Santa Ana, with her family in tow.  Her husband, Tom Bonikowski, was the driver in the car they were riding in and Nguyen spent the entire time pumping her fist and screeching “Viva Mexico.” It was embarrassing to watch! END_OF_DOCUMENT_TOKEN_TO_BE_REPLACED

I got a call the other day, out of the blue, from a former elected official I had not heard from in quite awhile.  She was upset about a post that fingered public affairs consultant Roger Faubel.  But we eventually got to talking about Curt Pringle and she was amazed to find out that a lot of conservatives don’t like him.  Why wouldn’t they like him, she wondered.  Why indeed.

I explained to her that Pringle and his henchmen have become experts at using the system to benefit themselves.  She countered that when these people advocate for toll roads, for example, they are just trying to make sure that all of the voters don’t get stuck paying for the new roads we need in order to service Orange County’s new developments. END_OF_DOCUMENT_TOKEN_TO_BE_REPLACED

The Democratic Party of Orange County (DPOC) is hosting a full day of Leadership Training on Saturday, June 22, 2013, from 10 am to 5 pm, at the Carpenters Union Hall located at 1918 W Chapman Ave, in Orange.

This comes at a depressing time for the blue party as their leader, President Barack Obama, has been awash in one scandal after another and his administration has turned into a massive threat to our civil liberties.

The DPOC has some real soul-searching to do.  They didn’t challenge Orange County Supervisor Janet Nguyen, a Republican, last year so she was easily re-elected.  Now she is the OC GOP’s major challenger for the 34th State Senate seat that is being vacated by termed out State Senator Lou Correa. END_OF_DOCUMENT_TOKEN_TO_BE_REPLACED

From the New Anaheim blog

Orange County’s Democratic State Assembly Representatives, Tom Daly and Sharon Quirk-Silva, did not vote for the “Trust Act,” which made its way once more through the California Assembly this week by a final vote of 44-22, according to Gabriel San Roman over at the OC Weekly.

San Roman reported that “The legislation was vetoed late last year when it reached the desk of Democratic Governor Jerry Brown. Supporters say the bill authored by Assemblyman Tom Ammiano will limit deportations fueled by the fingerprint-sharing federal Secure Communities program while restoring confidence between law enforcement and largely immigrant, Latino communities. It heads to the Senate next.” END_OF_DOCUMENT_TOKEN_TO_BE_REPLACED 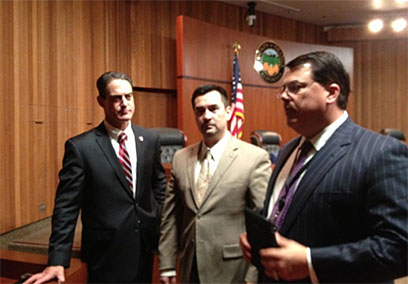 Supervisor Todd Spitzer asked Ramirez about a standing order for polo shirts, which I believe amounted to about $3,500 per order.  He then asked if she knew who the vendor was.  She didn’t.  But Spitzer did.  The canny former O.C. Prosecutor knew that the vendor in question went to high school with Daly. END_OF_DOCUMENT_TOKEN_TO_BE_REPLACED

The Orange County Board of Supervisors will be conducting interviews with the finalists who are campaigning to become Orange County’s next Clerk-Recorder.

Here is the schedule for Tuesday April 2nd, courtesy of the OC Political blog – the names of the candidates are linked to the packets they submitted to the Board of Supervisors, including their resumes: END_OF_DOCUMENT_TOKEN_TO_BE_REPLACED