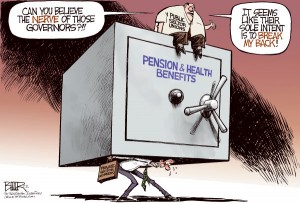 Detroit declared bankruptcy last week. For California, here are the takeaways from the Detroit News report:

“A bankruptcy judge could trump the state constitution by slashing retiree pensions, ripping up contracts and paying creditors roughly a dime on the dollar for unsecured claims worth $11.45 billion.”

“proposed paying most of the money owed to secured creditors while pension funds, unions and unsecured bondholders would receive, in some cases, 10 cents on the dollar.”

That’s right: 10 percent. Which means the funds themselves effectively would become insolvent, and pensioners would not get paid.

As I’ve written before, about 30 years ago the same thing happened to Detroit’s neighboring city of Highland Park. Bankruptcy led to the pensions being entirely canceled. When there’s no money, there’s no money.

« Are community organizers encouraging Obamacare fraud?
Poll – Which Democrat should run for the 45th Congressional District? »