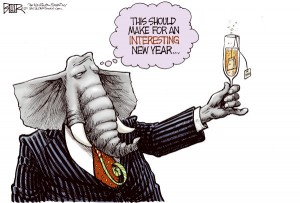 The Republican Party needs to start back at the basics –and the crux of that basis is data. We need to know what the voter thinks, wants, and will do to vote. Voters are smart. Therefore, to win public office, a political party needs to know who their voter is, where they are, and what they care about. Finally, the party needs to know all the digital ways to communicate with the voter.

Lately, it seems that Republican consultants have decided that they decide all these points either through osmosis or what they hear through groupthink. And they have been making an obscene amount of money on running bad campaigns.

Currently, it appears some light has fallen onto Republican circles. Several Republican groups are trying to develop “voter platform groups.” Voter platforms give campaigns access to massive voter data that can be digitized and put into Apps and on Twitter and other outlets.

However, notice I said groups. These groups are based on different principles striving for different goals. Too often, they are making petty arguments amongst themselves, which, it seems, is what Republicans do these days. We Republicans are better than this.

What I see is large egos and policy differences getting in the way of a great political party.

To me, corrective action is simple.

« The onslaught against Prop. 13 has begun
More secrecy issues at CalOptima as mystery check arrives »

One thought on “Will data help the CA Republican Party to understand the voters, and win?”