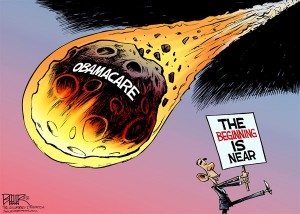 “Much of our focus, early in 2013, will be on health care. The legislature will work with Governor Jerry Brown to implements the federal Affordable Care Act [Obamacare] in ways that make the most sense for California.”

A May 31 Sacramento Bee editorial enthused:

“Californians can breathe a sigh of relief over a crucial first step in implementing health care reform. State officials last week unveiled the health plans and premium rates that will be available under the California health exchange. They show the market is working as intended — actually better.

“Thirty-three health plans – including some from out of state — competed to offer plans for the uninsured who don’t get insurance through an employer, through Medicare (the federal insurance program for the elderly) or Medi-Cal (the federal-state partnership providing insurance for lower-income Americans). Thirteen plans were selected….

“The competition has brought the rates lower than expected — even for so-called ‘young invincibles.’ Some experts have worried that younger people would choose to pay the penalty ($95 or 1 percent of income in 2014, and increasing in later years) rather than buy insurance.”

“Young invincibles” are healthy kids who take a chance they won’t need medical care except in an emergency. Then they’ll just pick up the tab themselves, or go on welfare to get government health care.

It’s crucial to get them into the system paying high premiums because then, as with Social Security and Medicare, they become the slaves that pay for the older folks who are less healthy and run up costs for the system when they get sick.

That means the youngsters will have less money of their own. So they’ll run up even more college debt. Or they won’t be able to save enough money to start new companies. America will continue to fall behind the rest of the world in technological growth, as such companies founded by youngsters as Facebook, Microsoft and Apple never get formed in the future.

The reality from Forbes:

« Spitzer’s recap of the highlights of the Supervisor’s Budget Meeting
Updated: Will Faubel’s pal McCusker get his seat on the S.M.W.D.’s Board? »