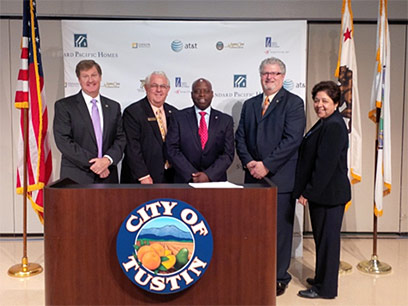 Highlights from the 18th Annual Tustin State of the City Luncheon

(Tustin, CA) – The City of Tustin and the Tustin Chamber of Commerce co-hosted their 18th Annual State of the City Luncheon on Thursday, June 6, 2013. Tustin Mayor Al Murray delivered the State of the City address through a dynamic short-film that highlighted the accomplishments and current projects of the city. “Tustin is really the heart of Orange County,” Mayor Murray said. “It is a dynamic city that is continuing to move forward.”

Mayor Murray proudly reported on the economic vitality of the Tustin Auto Center, the status of the Tustin road expansion projects, the national recognition of the “Missing and Exploited Children” call center base, the success of “Student Government Day,” and the Marriot hotel development projects. These were just a few of the many accomplishments that Mayor Murray boasted about.

“The first step to moving forward is to know where you’ve been,” Mayor Murray said. The Tustin State of the City Luncheon was a success. We look forward to where Tustin is headed in light of the great accomplishments it just celebrated!