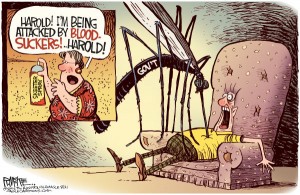 What connects the IRS scandal, the Benghazi scandal, the Associated Press scandal, and now the Fox News scandal? The federal bureaucracy has become so large that no one appears to be able to keep it under control.

It is disturbing that the President of the United States first heard that the IRS was targeting organizations based upon their political views on the evening news. Obama claims he was completely unaware of requests for greater security at our embassies and attempts to intimidate the press – issues of significant importance.

We do not expect the president to micromanage the federal government. However, we should expect our government to be transparent enough that our highest elected official is at least aware of issues of major importance. The sheer size and scope of our federal government has led us down the path heading towards total coercion by an army of unelected bureaucrats.

« Are we in a golden age of Orange County Mayors?
27,000 youth call for peace in International Peace Walk, in South Korea »

One thought on “A government too big to control?”