High government spending is the cause. High taxes are the effects.

Cutting government spending is the only way to make taxes lower.

Stop offering us temporary tax pain relief that merely dulls the pain … while the disease spreads.

The only way to get rid of the symptoms AND the disease is to reduce, then remove, the disease: Big Government, with its high spending. Do this, and we quickly get permanent, real relief from high taxes and their pain.

How much government spending?

“I have a simple proposal for politicians and political pundits,” said Geoffrey J. Neale, chair of the Libertarian National Committee. “Make huge, dramatic cuts in total government spending now. Immediately. This year. Right away. And keep doing it until we get government spending down to a level taxpayers can thrive in, not merely survive.”

In response to the poll question posted at the LP.org web site on March 14, 2013 which asks, “Is there any circumstance where proposing a new tax is justified?” 81 percent of those who rendered an opinion (excluding those who selected “I have a different view”) reject revenue-neutral tax proposals and insist that total tax revenue must always go down. They chose one of the options stating, “We should NEVER help to raise or create a new tax,” or the option, “Only if it’s to trade one tax for another, such as the income tax for a sales tax, but only if total taxes go down.”

A 62 percent majority said there is never a reason to raise a tax, under any circumstance, including in a trade for relaxing the marijuana prohibition. Half of this group asserts that taxes are at least 90 percent higher than they should be.

Only 7 percent of respondents selected the option for a tax exchange, the essence of the so-called “Fair Tax,” which proposes to substitute the federal income tax with a national sales tax and which gives the federal government the same level of tax revenue.

One voter had this to day about the poll:

“There were several options, but none of them represented the libertarian position, namely that taxation is theft and that no tax is ever justified at any time for any reason because it’s money taken by force. So I had to choose the last option, ‘I have a different view.’

“For heaven’s sake, how low has the LP sunk? What good does it do to even have such a poll put out by the LP where the LP’s longstanding position on the matter is not even an option?”

Many Libertarians have begun using Bitcoin, a decentralized, encrypted digital currency that can’t be controlled by the government. Although Bitcoin is still relatively new, it represents a social innovation that may continue to develop — an alternative to the centralized manipulation of money and credit by Big Government politicians.

The Libertarian Party is now equipped to accept Bitcoin donations through the services of BitPay. Although BitPay cannot currently handle automatic recurring monthly donations, you may donate through this system as often as you wish.

BitPay CEO Tony Gallippi has become the first member of the Libertarian Party to pay his membership fee through our new Bitcoin contribution page. You can join him today in making a Bitcoin donation — and pass the message on to your Libertarian friends who use Bitcoin. 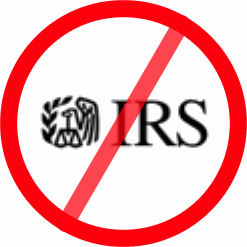 The Internal Revenue Service (IRS) is using social media networks like Facebook and Twitter to spy on taxpayers and determine whether they might be lying about how much taxes they owe, according to a new report by WTTG Fox 5 in Washington, D.C.

“The agency will also … collecting personal information from social media sites like Facebook and Twitter in an effort, they say, to help cut down on fraud,” said reporter Dan Bowens.

The IRS is a monster created and supported by Republicans and Democrats, who won’t even slow the growth of its grabs for new power, let alone shrink or dismantle it. The Libertarian Party is the only political party that calls for immediately abolishing the IRS, ending its ability to violate taxpayer privacy and suck massive amounts of wealth into endlessly wasteful Big Government programs.

“All persons are entitled to keep the fruits of their labor,” the Libertarian Party platform states. “We call for the repeal of the income tax, the abolishment of the Internal Revenue Service and all federal programs and services not required under the U.S. Constitution.”

Republicans claim to oppose high taxes, but they vote for more Big Government — and higher taxes. The latest case in point is a U.S. Senate vote to pass an Internet sales tax bill that would force online retail outlets to start collecting taxes on behalf of state governments.

Filing taxes with a song in your heart 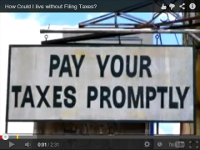 Do you file your taxes each year with a spring in your step and a song in your heart? The Libertarian Party may not be able to help out with the former, but here’s a tune that you’ll be humming all the way to April 15.

It’s a little reminder that filing taxes is a waste of time and effort and a huge drain on the economy. It also sucks much of the joy out of life when this time of year rolls around, taking up time that could be spent working, engaging in a favorite hobby, or spending time with friends and family.

So listen to Executive Director Carla Howell’s tax song and ask yourself: What would you do with the time you’d save if you didn’t have to spend it filing taxes?

Then ask yourself: If we were to elect Libertarian candidates who will cut federal spending, END the federal income tax, and give you back the earnings that you’re now paying in federal income taxes every year, what would you do with that money?

« Learn about warning signs of violence, drug abuse and mental illness on 4/17
Joint resolution from Senator Huff urges Congress to act on immigration »