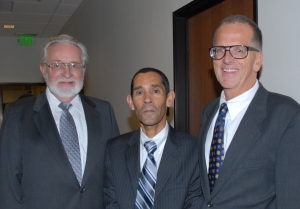 Public Defender to be Honored by Hispanic Bar Association

(Santa Ana, CA) — Orange County’s Public Defender, Frank Ospino, will be honored as Attorney of the Year by the Hispanic Bar Association of Orange County during an event on Saturday, March 2.

Ospino, who was appointed by the Board of Supervisors to the Public Defender’s post in February 2012, will receive the award presented annually by the Hispanic Bar Association to an outstanding attorney who has made a significant contribution to the legal community or to one who has enhanced quality of life for the Latino community. The presentation will be made during the group’s 35th annual Scholarship Fundraiser and Installation Dinner to be held at the Disney Grand Californian Hotel in Anaheim.

The Attorney of the Year honor recognizes Ospino’s efforts during his almost 25 year career with the Office of the Public Defender to provide effective legal representation to many low income residents of Orange County and his
commitment to providing access to justice for those most in need. Ospino is also the first Hispanic to serve as Public Defender for the County of Orange. He is a graduate of the University of California, Irvine and received his Juris Doctor degree from the University of California, Hastings College of the Law in 1984.